The Heraion of Perachora was a sanctuary of the goddess Hera situated in a small cove of the Corinthian gulf at the end of the Perachora peninsula. In addition to a temple of Hera of unusual construction and antiquity, the remains of a number of other structures have also been found, including a L-shaped stoa, a large cistern, dining rooms, and a second potential temple. The Sanctuary of Hera at Perachora is 14.2 kilometres (8.8 mi) north-northwest of Corinth and 75.9 kilometres (47.2 mi) west of Athens. The sanctuary was probably under the control of Corinth, as it faced the harbors of that powerful city across the Corinthian gulf. Cult activity at the site continued from the 9th century BCE to 146 BCE, when the Roman general Mummius sacked Corinth during the war with the Achaean League. There is a legend recounted in Euripides that Medea buried her murdered children at a sanctuary of Hera Akraia as she fled from Corinth. Herodotus tells the story of Periander stripping the clothes off of the Corinthian women at a sanctuary of Hera.In the 1st century CE, the Greek historian Strabo wrote that there was an oracle associated with the sanctuary. 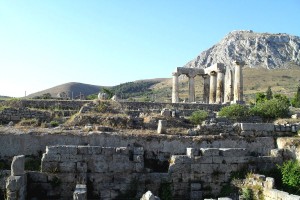 Ancient Corinth was an important city-state in ancient Greece. It checked an area corresponding to the east of the prefecture of Corinthia in the northeast of Argolida. Bordered Sicyon to the west, with the Megarians in the east, with Argos in the southwest and the south Epidaurus. Ancient Corinth controlled the key position of the Isthmus and it was the major commercial hub of the ancient world, to be threatened by Athens. Corinth was considered the richest city of the ancient world.

Mycenae (Mycenae Mycenae) was an ancient city of Argolida near Tritos mountain and across from the Gulf of Argolis. The archaeological site of Mycenae is located about 90 km southwest of Athens, in the north-eastern Peloponnese. It was one of the largest Greek culture centers, forming a strong military fortress towered over most of southern Greece. The period of Greek history between 1600 BC to about 1100 BC called “Mycenaean”, referring to Mycenae.

The Isthmus of Corinth was a dream building – a challenge that lasted 2300 years. Due to its geographical position, “Afneios Corinth” emerged from antiquity into a great nautical, commercial and cultural center.

The canal cuts straight line the Corinth Canal in length 6346 m. Its width at sea level is 24.6 m. And the bottom of 21.3 m., And its depth varies between 7.50 to 8 m . the total volume of soil that were extracted for the construction of the 12 million cubic meters reached 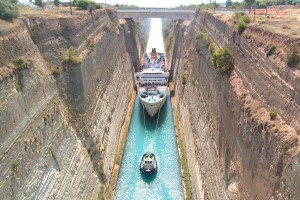 Of all the ancient theaters in Greece, the theater of Epidaurus is the most beautiful and best preserved. Destined for the entertainment of patients has a capacity of 13,000 spectators. The excellent acoustics, but also the very good situation in which it is maintained,  contributed to the creation of the Epidaurus Festival, an institution that has been going on for many years with performances of the greatest Greek actors as well as Maria Callas.

Scroll to top
This website uses cookies to improve your experience. We'll assume you're ok with this, but you can opt-out if you wish.Accept